A Not So Titanic 'Clash' 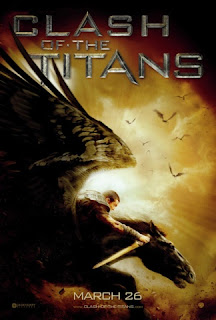 Perseus (Sam Worthington) just wants to follow in the footsteps of his adoptive parents and lead a simple life as a fisherman.  Unfortunately for Pers, whose real father is the head honcho of the gods, Zeus (Liam Neeson), demigods never have it that easy.  When the city of decides to defy the gods, Perseus’ entire family becomes collateral damage as Hades (Ralph Fiennes) sets about reminding the populace why it isn’t smart to piss off deities.  After giving just a small taste of the kind of smackdown he’s capable of delivering, Hades demands the sacrifice of the Princess Andromeda (Alexa Davalos) to the Kraken, a giant sea monster with an even worse disposition than his.

Perseus isn’t particularly interested in any of this until he learns that, by killing the Kraken, he will automatically get a title shot at Hades as well.  So, motivated solely by a desire for vengeance, our “hero” sets off to acquire the knowledge and weapons he will need for his task.  Accompanying him are way too many minor characters than any straight forward fantasy/adventure movie needs, including Io (Gemma Atherton), a woman cursed with immortality who watches over Perseus and provides him with advice.  Anyway, the group fights lots of monsters and makes friends with some Tusken Raiders who wandered off the set of ‘Star Wars’.  The ultimate goal is to reach the lair of Medusa, a snake woman whose head is the only weapon that can kill the Kraken.

This should all be a lot of fun, but it isn’t.   See, you don’t need much for a movie like this to work, but at the bare minimum your hero (or antihero, as the case may be) needs to be compelling.  Perseus is not.  He just sulks around like a petulant adolescent with a cloud over his head muttering about how he doesn’t need any stinking gifts from the gods.   Beyond that, the character has no personality traits that I could discern.  It’s impossible to feel any emotional attachment to Perseus, or any of the characters, for that matter.

All that’s left is to sit and watch the action and effects scenes with a sense of cool detachment.  But even on that level, the movie is far from a success.  As is apparently mandatory these days, most of the action scenes are shot in shaky confuso-vision.  So even when there’s something cool happening on screen, the movie does its best to keep you from actually seeing it.  As for the monsters, for the most part they’re ok.  Like most CGI, they move smoothly and are integrated well into the overall film, but lack personality.  They have the feeling of something created by committee rather than by a single artist.  The one real failure is Medusa.  I’d expect to see something like this on an episode of Hercules: The Legendary Journeys, not in a major blockbuster.

So far I’ve avoided any mention of the original 1981 version of this film, preferring to deal with this year’s model strictly on its own terms.  So briefly, here are the main differences between the two.  Obviously the special effects technology available today makes it possible to present mythological monsters and scenes of mass destruction in a more realistic manner.  That said, the monsters in the original, hand crafted and animated by effects genius Ray Harryhausen, have more personality and life.  For me it was a draw, but if you’re one of those sad people who can only enjoy a fantasy movie if it looks realistic, you’ll probably give the edge to the remake.

In terms of screenplay, neither film is exactly an Oscar contender.  The original had a number of ridiculous plot contrivances, not to mention a goofy mechanical owl meant as an R2D2 rip-off.  There’s still a great heroic epic at that film’s core, though.  And since the movie never takes itself too seriously, it’s hard to get upset .  The new version opts for a more serious tone.  All of the silliest aspects of the original have been eliminated, which is fine, but so has much of the original’s sense of wonder and adventure.  Also missing is the romance between Perseus and Andromeda.  Without the romance, the new Clash feels like it’s missing its soul, not to mention any kind of motivation for the hero that an audience can really get behind.

The lack of heart is really the deal breaker for me with this movie.  With no characters to care about, what’s the point?  The sheer spectacle of it all provides some entertainment value, but it’s certainly not enough to recommend that you pay to see this in a theater.  Even if I didn’t have warm nostalgic feelings for the original Clash, this remake would still come up short.  2 out of 4 stars.
Posted by Bob Ignizio at 10:25 PM

I cant believe they actually eliminated the romance angle..I mean that was the whole freaking point of the original! That sucks.

Instead they turn this one into a movie about a son who doesnt want to be like his father...which also goes against what the first film was about. Perseus never rejected the gifts from the gods!

I still havent seen this one, unfortunately for me, here in Puerto Rico, they decided to release this one one whole week after you guys in the states. So I wont be seeing this one until next Thursday. I guess you can expect a review from me on this one by Friday.

Strangely, my hopes are still up for this one. I just hope that my expectations wont be entirely crushed. At this point, I aint expecting the same movie, and Im not expecting a masterpiece. Maybe just a fun monster movie.

Ray Harryhausen, as I understand it, often created his animations first and then the plot was written around them. That is how much he loved what he was doing, and it shows in the work. CGI has no one to love it, except maybe some computer geek on the bottom end of the business. The preternatural movements are a huge part of why Harryhausen's effects work better in a film like this; they look otherworldly, and that's what I'm looking for in a fantasy film.

@ FC: By now you've done your own review of 'Clash', and I think you hated it even more than I did. I don't understand how that movie is making so much money when almost no one I know has said they liked it. Guess it's another victory for good marketing.

@ James: Right on the money. CGI can have emotion when you hire guys who have the same kind of passion Harryhausen did, as Gollum proved in 'Lord of the Rings'. But that's definitely the exception.