'I Sell The Dead' is ghoulish good fun 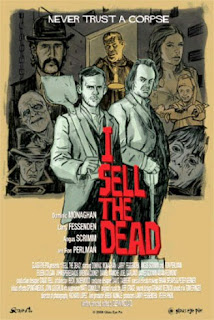 Arthur (Dominic Monaghan) and Willie (Larry Fessenden) are a likeable if unsavory pair of grave robbers and, possibly, murderers.   Now the two have been sentenced to death for their crimes.  From his prison cell, Arthur recounts to Father Duffy (Ron Perlman) the events which led him to his fate.  As a child, Arthur (played in his younger years by Daniel Manche) learned the tricks of the ressurectionist trade from Willie.   At first the duo’s main employer is Doctor Quint (Angus Scrimm, familiar to horror fans as “The Tall Man” from the Phantasm films), an unscrupulous physician in need of fresh corpses for his medical research and not too picky about where they come from.  But things turn from the merely morbid to the supernatural when the Arthur and Willie learn there’s an even better market for the bodies of the living dead.  Business picks up considerably once they start dealing in vampires, zombies, and other assorted oddities.  But not only is the product itself more dangerous to handle, there’s a rival group of grave robbers who don’t take kindly to anyone infringing on their turf.

Most contemporary horror films tend either to want their audiences to feel like taking a shower by the time the credits roll, or else downplay their horror elements completely in favor of slick action movie tropes.  I Sell The Dead is defiantly un-modern, instead drawing its inspiration from the gothic British horror films of the sixties and seventies and their American counterparts from AIP, most notably Roger Corman’s The Raven and Jaques Tourneur’s Comedy of Terrors.  Although released unrated, the film contains no nudity, very little gore, and only mild profanity.  It doesn’t try to numb you with constant noise and action, instead trusting in its characters, story, and gleefully black humor to hold the viewer’s attention.

The casting is also refreshingly old fashioned, favoring seasoned character actors over more marketable pretty young faces.  Usually cast in comic relief supporting roles, Monaghan acquits himself well here as a more subdued, relatable character.  John Speredakos makes a fine villain as the leader of the rival gang of grave robbers, and Brenda Cooney conjures the spirit of Hammer movie sirens like Ingrid Pitt as Willie and Arthur’s saucy apprentice Fanny.  Scrimm and Perlman don’t have a lot of screen time, but they make the most of what they’re given, hamming it up in a manner that would have brought a devilish smirk to Vincent Price’s face.  But it’s Fessenden, himself a director of several horror films (Habit, Wendigo, The Last Winter), who steals every scene he’s in as the crassly comical Willie.

This is writer/director/producer Glenn McQuaid’s first film, and as such it’s an impressive achievement.  Some nitpickers have pointed out a few anachronisms and inaccuracies, which seems kind of pointless given the tone of the film.  Besides, considering the budget, the period set design and costuming are more than sufficient to create the necessary atmosphere.  The special effects are also well done.  There’s no CGI here, just practical make-up and a few bits of old-school trick photography.  On the downside, the movie could stand to flow a little better, and not every one of its episodic vignettes packs as much of a punch as one might like.  There’s also a revelation about Perlman’s character that appears to be meant as a surprise, but any viewer paying even the slightest attention will see coming a mile away.   One can’t completely gloss over those issues, but they’re still not enough to prevent the film from being a great bit of fun and a refreshing change of pace.   3 out of 4 stars.
Posted by Bob Ignizio at 2:21 PM

A throwback to old Hammer movies? Sign me up! Brilliant idea by the way, making a moder Hammer/AIP film.

Some have tried it and failed...like for example Van Helsing.

This is way more in the spirit of the old films than 'Van Helsing'. I think you'll like this one, although I'm sure like me you'll have some gripes.