Nicholas Cage Goes Over the Edge in 'The Bad Lieutenant: Port of Call New Orleans' 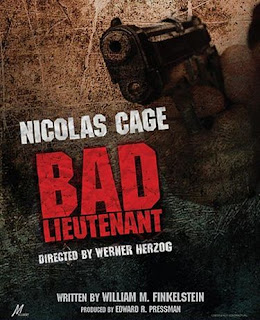 In the aftermath of hurricane Katrina, police officer Terence McDonagh (Nicholas Cage) makes a fateful decision to rescue a prisoner trapped in the rising floodwaters.  In doing so, he injures his back and winds up needing pain medication for the rest of his life.  But prescription drugs alone just won’t do the trick, and it isn’t long before Terence is hooked on cocaine and heroin, often sharing his stash with his prostitute girlfriend Frankie (Eva Mendes).  Terence tries to keep it together when he’s picked to head up the investigation of a multiple homicide, but his vices threaten to drag him down.

The above paragraph is a fairly accurate summation of the plot of The Bad Lieutenant, but it doesn’t begin to describe the movie.  This remake in name only of Abel Ferrara’s 1992 film takes what could have been a fairly pedestrian crime and sleaze storyline and turns it into a twisted black comedy that gives Nicholas Cage his best role in years.  The film is directed by Werner Herzog, surely among the best living directors still making films.  Unlike , Herzog isn’t interested in his Lieutenant finding redemption.  He simply wants to see how far over the edge this character can go.  And with Cage in the lead role, that’s pretty damn far.

This is a very funny film, and one that is constantly blurring the line between “funny strange” and “funny ha-ha”.  As for the story, most of the threads do get wrapped up, but in such an arbitrary (and funny) way that it’s clear Herzog isn’t interested in anything resembling a traditional plot resolution.  Is Bad Lieutenant a masterpiece on the same level as other Herzog films like Fitzcaraldo or Aguirre The Wrath of God?  I’m inclined to say no, but that doesn’t change the fact that I was never less than mesmerized by the film.
Posted by Bob Ignizio at 11:34 PM