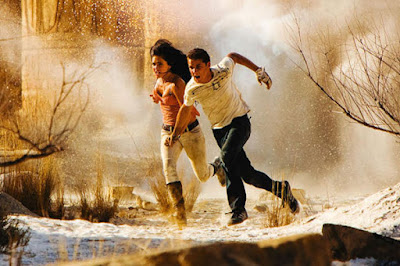 I’ve been kind of slacking off on the blog over the holidays.  I’ll have reviews of some new movies and CDs coming soon, but in the meantime I figured I’d get one last parting shot in at some of the movies that caused me pain in 2009.  For the purposes of this list, I’m sticking to movies that got an actual theatrical release.  I saw plenty of straight to video flicks that were worse than most of the titles on this list, but picking on those is like shooting fish in a barrel.  Besides, I’m sure most of you are smart enough to walk past crap like Legend of the Bog and Mega Shark vs. Giant Octopus.  Either that, or you suffer from the same mental illness I do, and nothing anybody says is going to stop you from hurting yourself.

The Haunted World of El Superbeasto:  I know I said I wasn’t going to pick on straight to video movies, but I’m going to make this one exception.  I really wanted to like this animated mix of horror and sleaze, but as with Halloween 2, but there’s nothing here but a bunch of nods and winks at other, better movies.  Yes, we all know that Quentin Tarantino steals shit from other movies, too.  The difference is, Tarantino takes those stolen elements and integrates them smoothly into a fresh concoction of his own.  Zombie just throws a bunch of random shit he likes into a blender and throws it up on the screen.
Posted by Bob Ignizio at 2:26 PM

I actually liked Orphan, I thought the direction was great, and the performance from that girl...amazing. The ending left me speechless...I dont know, I just loved that movie.

Knowing I liked, because it had these amazing effects, and because it was about science vs. religion. Didnt really hate it.

But I agree with ya on TRansformers 2! Im still amazed at how that movie made money! Its so baaaad!

I havent seen Halloween 2, but I keep hearing awful things about it. From what I hear, making that film wasnt exactly a fun experience for Rob Zombie.

The Unborn, NOW theres a bad movie. Wow...it tried to be scary, it tried, but in the end, that exorcism scene where they had to sign papers to do it and they had to translate the jewish...oh my god absolutely laughable!

I was curious for THe Fourth Kind, Ill still check it out when it hits DVD.

I agree with you with Land of the Lost, it was so bland, so uninspired! It was another one of Will Ferrells bad films. Like Bewitched.

Ive heard good things about Precious, so I dont know about that one.

If you thought the makers of Black Devil Doll were trying to be "edgy" then you completely missed the point, which doesn't surprise me.

Pull your head out of your ass.

@The Film Connoisseur - Yeah, I know some other people who liked 'Orphan' and whose opinions on horror I respect. It just didn't work for me.

The thing with the religion vs. science aspect of 'Knowing' that annoyed me is that it felt like the movie tried to have it both ways.

I'm definitely in the minority on 'Precious'. By all means I think you should see it and come to your own conclusions. If nothing else, the performances are good.

@Anonymous - 'Black Devil Doll' is a movie that revels in pushing racial hot buttons to get a rise out of the politically correct. I call that trying to be edgy, you call it what you like. However you choose to describe the filmmakers' intent, in the end it's a one joke movie about a puppet raping and killing silicone enhanced women filled with juvenile jokes about race and gender. Yawn.

If you have something of substance to say on behalf of the film, I welcome your further comments. If "pull your head out of your ass" is the best you can do, please go trolling elsewhere.

"a puppet raping and killing silicone enhanced women filled with juvenile jokes about race and gender."

And that is the pure simplistic GENIUS of Black Devil Doll. And the reason why it has been embraced and adored by me and so many other genre fans.

Is there anything wrong with turning off your brain for 70 minutes and enjoying pure filth for the sake of filth?

THAT is the point which you are too fucking smarmy to see.

@ Anonymous - Aside from the racial angle, which is just cheap and easy shock value, there's little to distinguish 'Black Devil Doll' from the hundreds of other no-budget exploitation flicks that litter the tables at horror conventions everywhere. I've seen boobs and red kayro syrup before. If wanting a little more than that from a movie makes me smarmy, so be it.

Its true, Knowing didnt really take sides with either issue, and that point actually confused a great many viewers.

I guess if you are religious, youll see it as God destroying the evil humans and starting again, same as he does in the bible.

If you are more inclined towards the scientific explenations in life, youll see it as aliens coming down to save humans because their planet is about to be destroyed.

I saw it as aliens coming down to save humanity. I mean, those were freaking spaceships, angels dont use spaceships is what I always say.

@ The Film Connoisseur - maybe the angels just wanted to take it easy for a change? ;)

Never saw BDD, but now I know I won't waste my time on that one.

I agree 100% with you on H2, but I have to disagree on Superbeasto. I really had fun with that one, but as we discussed today...it probably has something to do with my love for Family Guy.

The one good thing about Unborn was Odette, but not even her beauty could save it. I can't believe Oldman wasted his time in this one.

Same thing with TF2...we had some good looking babes, some sexy looking cars and some cool robot battles...BUT...no story!

Land of the Lost looked so bad in the trailers that I stayed far away from this one. Same thing with the Fourth Kind.

I agree with the Film Connoisseur on the Orphan. I had a good time with this one.

As for with Knowing, I felt like I knew better not to touch this one and by gauging from what I hear from others I think I made a wise choice not seeing it.