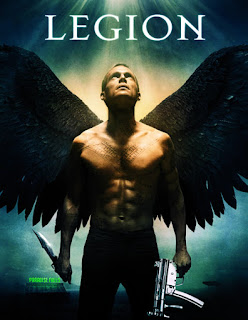 I tried to get my wife to go see Legion with me over the past weekend.  She said it looked like crap, and wondered why I do such things to myself.  I told her I thought the movie would be fun, and she would be missing out.  However, in the case she was right, I promised I would write the following:  I should have listened to my wife.  Well, I should have listened to my wife.

The Archangel Michael (Paul Bettany) arrives on earth in a damp, dark back alley.  He breaks into a warehouse, cuts off his wings, and steals an assload of guns (not to mention a spiffy suit).  On his way out of the building, Michael is stopped by a pair of policemen.  One of the cops starts shaking his head back and forth really fast like he’s at a Slayer concert while his eyes turn black and his mouth sprouts razor sharp fangs.  It’s nothing an angel with a machine gun can’t handle, but that’s only the beginning of the supernatural shit storm that’s been unleashed on the world.

Meanwhile, the extremely pregnant Charlie (Adrianee Palicki) is working as a waitress at the truck stop, a dump in the middle of the desert owned by cranky divorcee Bob (Dennis Quaid).  Charlie’s job seems mainly to entail taking smoke breaks and giving blueballs to Bob’s son Jeep (Lucas Black).  Also on hand at the truck stop: pious one-handed cook Percy (Charles S. Dutton), an obnoxious yuppie couple and their rebellious daughter stranded due to car trouble (John Tenney, Kate Walsh, and Willa Holland), and a lost traveler looking to use the phone (Tyrese Gibson).  Cut off from the outside world, these folks have no idea what’s going on until a little old lady shows up and starts scampering across the ceiling and chomping on people.

So up to this point, the movie has been pretty ridiculous but entertaining.  The little old lady scene, and later an assault by an ice cream man are the sort of deliriously goofy moments fans of “so bad it’s good” cinema live for.  But after the initial siege, the movie grinds to a halt for its mid section.  Most of this is to stop and flesh out characters just prior to killing them off.  Meanwhile, the main protagonists and specifics of the plot are left sketchy and incomplete.

Another problem with Legion stems from the fact that the script was originally written with demons in mind rather than angels.  Director Scott Stewart liked the idea of angels better, and frankly that could have been cool.  The problem is, it seems that all Stewart’s rewrite consisted of was replacing the word “demon” with the word “angel” in the script.  The “angelically possessed”, as Michael describes them, still look and act the way one would expect demons to behave.  They manifest as mindless, animalistic creatures with pointy teeth and a blasphemous streak, at one point crucifying a character on an upside down cross.

The biggest issue left unresolved by the change from demons to angels is the nature of Charlie's baby.  I imagine it was originally intended to be the second coming or something along those lines.  I can see how Satan and the forces of Hell might want to stop such a child from being born.  But with the changes to the script, it’s now God trying to stop the baby from being born.  So is the baby still His?  Did He get drunk and knock up Charlie while out on a bender, and now He doesn’t want to pay child support?  If not, then what exactly is the nature of this infant who is supposed to be mankind’s salvation, and how is he or she supposed to bring that salvation about?  I don’t know, and neither does anyone involved in this movie.

Being an agnostic, it’s not that I’m offended by the liberties the film takes with traditional religious beliefs.  I’m just annoyed that it spends so much time on such a poorly conceived mythology.  That, and I don’t understand why you would make a movie about angels if you’re not going to use the idea to its full potential.  We get one brief scene where Michael has a flashback to a conversation with fellow archangel Gabriel (Kevin Durand) that shows how cool this could have been.  While the two discuss the orders they’ve been given by God, a squadron of warrior-angels swoops and dives in the background, ready for an all-out aerial assault that never comes.  Once the action moves to earth, Michael and Gabriel are apparently the only angels smart enough to realize simply maintaining their true form is more powerful and effective than possessing the fragile bodies of humans.

Ultimately, though, it doesn’t matter whether it’s angels or demons.  Although Legion does pick up again in its third act, that sagging middle just about kills it, especially since it gives you time to think about all the inconsistencies of mythology and plot.  If the movie had maintained the level of energy and fun it started out with, it would have helped cover up those flaws.  We’d still have a bad movie, but it would have been a fun bad movie.  Instead we’re left with a few enjoyably goofy moments with a lot of ponderous exposition that serves no purpose in between.  2 out of 4
Posted by Bob Ignizio at 3:37 PM

Well, you did squeeze a pretty funny review out of that turd, so I guess it was worth something.

I shared your wife's reservations about this one, and continually marvel at your capacity for cinematic punishment. I was most shocked, however, to find out you are agnostic. I always thought you were more of a Calvinistic Methodist.

Suucks! I was kind of looking forward to this one! I still am I guess, but your review made me want to wait till dvd.

I hate it when they take biblical mythology and totally portray it wrong.

No angel would go against gods wishes to destroy the earth! If they did that they would become demons.

I kind of felt the same way you did with the whole angels and demons thing. I was asking myself so its angels against god? Cause god wants to destroy humanity?

They got it all wrong because according to prophecy, god will only destroy those who deserve it and let the good guys live. The bible never talks about completely eliminating humanity. The faithful are supposed to be saved. Its not as if ALL of humanity was going to be destroyed.

OH but whatever, this movie looks like a complete fuck up.

@ Ben - compared to some of the stuff I watch, this was a cakewalk.

@ Marguerite - Yeah, wait for DVD or Blu Ray if you still want to see it.

@ Film Conniseur - I don't really mind them changing biblical mythology. What bugs me is they didn't even seem to have any kind of consistent internal mythology of their own. It was totally half-ass.

Ha. Great review, Bob. To be honest, I really enjoyed Legion, especially after being bummed about Daywalkers and The Book of Eli. But you nailed everything that was weak about it. Well done!

Thanks for the comment, CB. My fellow blogger Jeff liked it as well (those interested in a more positive review of the film can see what he says here ). I can definitely see where both of you are coming from, since there are some undeniably enjoyable moments in the movie.