Fly Me to the 'Moon' 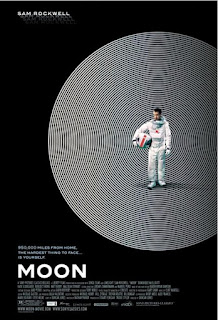 Sam (Sam Rockwell) is nearing the end of his 3 year contract as a miner on the moon base Sarang.  His only companion is the computer GERTY (voice of Kevin Spacey), and the satellite allowing live communications with his employers and loved ones back on earth is in need of repair.  Perhaps it’s the resulting loneliness that is causing Sam to hallucinate.  While driving a lunar rover on a routine mission, one of Sam’s hallucinations causes him to have an accident.  Shortly after awakening in the infirmary, Sam sees GERTY having a live conversation with mission control.  He is also prohibited from leaving the base, but manages to trick GERTY into letting him out on the pretense of doing some repairs.  Driving back to the site of his accident, Sam is surprised to find… himself, still unconscious in the crashed Rover.

So what the heck is going on?  Is this an hallucination?  Is one of these “Sams” a clone or a robot?   Both Sam and the audience get the answer to these questions fairly quick.  This isn’t one of those movies all about some “mind blowing” secret.  It’s about the ramifications of what Sam learns, both for him personally, and in a broader sense, for all of human society.  This is the sort of thoughtful and adult science fiction film that used to be commonplace in the late sixties and early seventies.  Comparisons to 2001: A Space Odyssey and Silent Running seem particularly apt, but this is no mere homage.  Rather Moon is a film that embodies the spirit of those films and applies it to something fresh.

I also have to give the movie kudos for using old school special effects techniques.  When I was watching the movie, I thought to myself, “wow, that’s some of the best CGI I’ve ever seen.  That land rover looks like it’s really there.”  Well, it was really there.  The film used models, and there’s a subtle feeling of tactile reality you get from using models that just isn’t there with CGI yet.  Most of the moonbase was built as an actual set, as well.  Everything looks so good, it’s hard to believe this movie was made for $5 million.

This is a very minimalist film.  To a large degree, it’s just Sam Rockwell talking to himself.  Luckily Rockwell is one of the best actors working these days, and he’s more than up to the challenge of carrying the film.  That said, Spacey does a great job as the voice of GERTY, recalling HAL9000 while at the same time presenting a different take on artificial intelligence.

I have to applaud the vision of writer/director Duncan Jones.  Moon is smart, relevant, and gripping, with the science fiction elements always subservient to story and theme.  There are no action scenes or moments of artificial drama, but the film is never for a second dull.  This is just a great story told well, and easily one of the best movies of 2009.  Sadly I’m just now seeing it, but it would have landed somewhere in my top 5 for sure.  4 out of 4 stars.

Duncan Jones is the 38 year old son of David Bowie. He's really making a name for himself. Dad had no involvement in the film but is quite proud of it. Look for Duncan to direct Source Code, Escape from the Deep, and Mute, a sort of follow up to Moon which takes place in Berlin. Sam Rockwell will have a cameo role.

I had really wanted to see this when it came out, but I was in Puerto Rico and never managed it. I'd really like to see more serious sci-fi like this being made, rather than the action-fantasy fluff it has frequently been reduced to. This much-maligned genre has so much potential.

@ sazerac - thanks for the info. I knew Duncan was Bowie's son, but that gets mentioned so much I think it overshadows the movie. As you said, dad had nothing to do with it, and Duncan deserves to stand or fall on his own merits.

I'm definitely looking forward to those future projects you mention.

@ Ben - I couldn't agree more. There's nothing wrong with action oriented sci-fi, but since 'Star Wars' the more serious kind of films have gotten rarer and rarer. Kind of ironic considering Lucas himself started out with the more serious 'THX1138'.

I loved this one as well, read that Duncan Jones is looking forward to a second film, following the adventures of Sam...he will probably get a bit more moolah to make it based on how well this movie was received and conceived.