The Davis Baby Lives Again in 'It's Alive' Remake 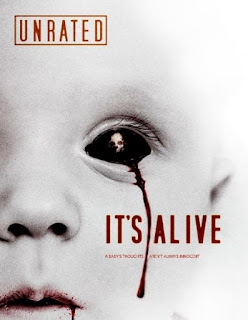 Grad student Lenore Harker (Bijou Phillips) leaves school to have a baby and start a family with her architect boyfriend Frank Davis (James Murray) and his paraplegic younger brother Chris (Raphael Coleman).  Not only does the baby come earlier than expected, requiring a cesarean section, the birth turns into a bloody massacre when all the doctors and nurses are viciously murdered during the delivery.  The movie makes a half-ass attempt to treat the identity of the killer as a mystery, but you don’t have to be familiar with the 1974 film this is a remake of to guess that there is something wrong with the baby.

The original It’s Alive was a gleefully lurid exploitation flick with strong performances, a dash of social commentary, and a cheesy but memorable monster.  This update opts for a more subtle approach.  That might have worked, except that the script is riddled with credibility stretching moments and idiotic characters it’s impossible to care about.

The monster baby is problematic, too.  On the one hand, we’re supposed to believe it looks normal enough that no one notices anything unusual about it, other than being a bit big.  At the same time, the baby possesses long, razor sharp claws and teeth from birth, but apparently no one, including the hospital staff, thinks this is odd.  For the most part the terrible tyke is kept in the shadows, which is fine.  When we finally do get a good look at the CGI rugrat, though, it just doesn’t look capable of all the murderous mayhem credited to it.

To make matters worse, director Josef Rusnak shoots everything with a detached blandness.  There’s not one interesting shot in the entire movie, and Rusnak shows no affinity for either suspense or horror.  Things aren't much better in the acting department.  Phillips is annoying and shrill, and everyone else is flat and lifeless.  Unfortunately, the movie is just competently made enough to keep you watching in the hope that it will deliver some kind of pay-off.  It doesn’t.

Larry Cohen, writer/director of the 1974 version of It’s Alive, was originally slated to write and direct this remake, as well.  Cohen is still listed as co-writer of the screenplay, but according to this interview little of what he wrote made the final cut.  Maybe Cohen’s update of the material would have been better, maybe not.  All I know is this is one baby even a mother couldn’t love.  1 out of 4 stars.
Posted by Bob Ignizio at 2:00 PM