'Black Dynamite' Explodes on the Screen! 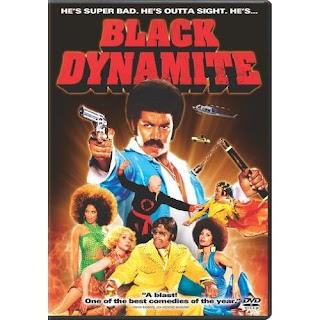 Michael Jai White IS Black Dynamite!  When his younger brother is murdered, Black Dynamite springs into action to take down those responsible in this spot-on homage/parody of seventies blacksploitation movies.  I know what you’re thinking.  Didn’t Keenan Ivory Wayans already do this in I’m Gonna’ Git You Sucka?  Not exactly.  Wayans film was a fairly slick production that drew it’s inspiration mainly from bigger budget blacksploitation films like Shaft and Superfly.  Black Dynamite draws on those films as well, but it’s mainly inspired by really low budget stuff like Rudy Ray Moore’s Dolomite and The Human Tornado, or the Jim Kelly vehicle Black Belt Jones.

Every effort has been taken to make Black Dynamite look like an authentic low budget action flick from the seventies.  Not only are the clothes and sets convincingly vintage, boom mikes occasionally pop into frame, the editing is choppy, and the fight choreography is often less than convincing.  And White, who also co-wrote the screenplay, is about as perfect a seventies action hero as you could ask for.  He’s got the fro, the sideburns, and the mustache.  He’s ripped as fuck.  He knows kung fu.  And just like Shaft, he’s a sex machine to all the chicks, at one point in the movie satisfying three lovelies simultaneously.  The only time the illusion of a lost seventies classic is spoiled is one brief scene that uses CGI fire.

Getting the details right is certainly commendable, but it wouldn’t matter if the film wasn’t entertaining.  Thankfully, it is.  Even its most ridiculous gags are played completely dead pan, which makes them even funnier.  Just about every joke, and there are a lot of them, hits its target.  There are several memorable scenes, including a great animated zodiac sequence.  From the opening Anaconda malt liquor ad to the final climactic battle between Black Dynamite and “The Man”, this is one immensely enjoyable movie.  If I had caught this a little earlier, it would have made my top 25 list for sure, maybe even my top 10.  It’s certainly as funny as either The Hangover or In the Loop, the other two comedies on my top 10.

Black Dynamite received a limited theatrical release, playing a few days in one city before moving on to another.  I was lucky enough to catch it this past Saturday at the Cleveland Cinematheque, and it’s definitely the kind of movie that plays great with an audience.   So when it hits home video on DVD and Blu Ray February 16th, be sure to invite a few friends over to enjoy the fun.

I want to see this more than world peace.

The previews for this one made me want to watch it immediately, it looks hilarious. Glad to see a positive review on it!