'Up in the Air' is a good, but light-weight film 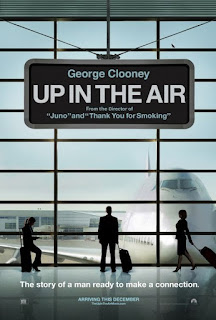 Ryan Bingham (George Clooney) is a professional hatchet man.  When businesses have to downsize, he’s the guy who gets called in to deliver the bad news.  Bingham has no close friends or family, and loves having a job that keeps him constantly on the move from one city to the next, living out of airports and hotel rooms.  He finds a kindred spirit in businesswoman Alex Goran (Vera Farmiga).  The two strike up a casual “fuck buddy” relationship after meeting in a hotel bar, and soon they are coordinating their schedules so they can get together for booty calls.

Ryan’s freewheeling lifestyle gets put in jeopardy when young computer programmer Natalie (Anna Kendrick) comes up with a way to do his job over the internet.  Dreading the thought of being tied to a desk, Bingham convinces his boss (Jason Bateman) that Natalie needs to see what it’s like to do the job face to face before implementing her plan.  The two then set off to relieve hundreds of American workers of the burden of employment, stopping at various famous locations along the way to take pictures of a cardboard cut-out of Bingham’s sister and her future husband for a wedding present.

While it is Bingham’s job that drives the plot forward, the movie is more concerned with the idea that happiness is impossible without meaningful relationships.  That's fine, but then the movie takes it further to say that happiness is impossible without a spouse and children.  This is most clearly expressed by Natalie, who looks at Alex and Ryan as though they were insane for not wanting a more traditional relationship.

At times the movie shows some ambivalence towards this idea - Natalie is dumped by her boyfriend, one of Ryan’s sisters is shown having separated from her husband, and there’s a final twist regarding Alex that I won’t reveal.  But that ambivalence is undermined by the film’s closing montage of (real) fired workers talking about how their wives and children gave them the strength to cope with their situation.  Look, whatever helps a person deal with something as serious as losing a job, I’m for it.  But the implication here is that those without family, like Bingham, are somehow worse off than they are.  Ah yes, poor little rich boy.  This is the film’s final word on the subject.  It kind of reminds me of the scene in They Live where Roddy Piper puts on his special sunglasses, looks up at a billboard, and instead of the ad that should be there sees simply the words “marry and reproduce”.  No doubt the evil aliens from that film would approve of Up In the Air’s message.

Still, as Roger Ebert often says, it’s not what a movie is about, but how it’s about it.  And for the most part, Up In the Air is a well made, enjoyable, and funny film.  Clooney is perfectly cast.  I can’t imagine any other actor making this character likeable as he goes about destroying lives while bragging about his fancy hotel and rental car membership cards.  Vera Farmiga is excellent, as well.  With this film she should make it onto the ‘A’ list, and hopefully won’t have to star in crap like Orphan again anytime soon.  The one weak link for me is Anna Kendrick’s Natalie, though I blame writer/director Jason Reitman rather than the actress.  As written, the character is a comic relief caricature that just doesn’t seem to exist in the same universe as Clooney and Farmiga’s nuanced, believable characters.

I’ve already mentioned my distaste for the film’s trite message that marriage and kids are the only road to happiness.  I also can’t help but think, given the current economic climate, that more of substance should have been said about all the people Bingham fires.  Mostly, though, the movie just plays being fired for laughs.  And yeah, watching Zach Galifianakis and J.K. Simmons respond to the loss of their jobs is funny.  But losing a job in real life isn’t.  The movie only offers one moment in which we see just how serious that can be, when we learn that one of the people who lost their jobs committed suicide.  The scene does have some power, but its main purpose seems to be moving the plot in a new direction rather than any sort of serious commentary. And then we’re on to the montage of happy jobless people.  Up In the Air is still a good movie; it's just not a great one.  3 out of 4 stars.
Posted by Bob Ignizio at 3:23 PM

I would have thought having financial responsibility to a spouse and kids would make getting fired MORE stressful, not ease the blow. A single person with no duty to spouse and children is much more flexible and adaptable in the face of downsizing, being able to re-locate easier and survive on less income. Anecdotal evidence of fired people "getting strength" from their immediate families is likely misleading or overstated. Many downsized workers might claim this to an interviewer or on camera b/c it is socially expected to cast a positive spin and reinforce cultural values, but just taking their word for it does not measure other more telling outcomes (comparative divorce rates, depression, substance abuse, job seeking, etc.). A person with a family is also probably more likely to downplay their anxiety and depression for the sake of their loved ones. While I can conceive of one's family helping in times of crisis, I do not think this is the only feasible means of coping, and the added responsibility and relational stress could negate the effects of familial support even when it is forthcoming (however, not all spouses and children are as endlessly nurturing as we publicly claim them to be). In short, I agree with you. I also think this film could have ill-intended implications for employers... when having to choose who to let go, with all things even, it is apparently more humane to fire the family man. He'll recover easier.

I'm going with Ben. I think having a wife and child...or children...is MORE stressful. I can't say that it gives life more meaning to get hitched and breed. But it certainly adds more stress!

Todd lost his job 5 weeks ago (with his former employers repeating "Your services are no longer needed" over and over like robots any time he asked a question) which makes me the lone bread winner. So he's stressed, I'm stressed, and my stress makes him more stressed and vice versa.

I wanted to see the movie before your review but now I want to see it even more. But I'll probably wait until Todd is employed again before I do so.

By using RentalCars you can discover the best car hires at over 49,000 international locations.