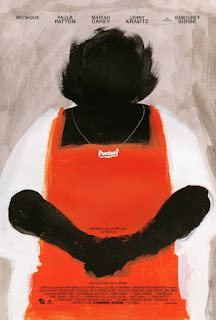 In the opening moments of Precious, we learn that the morbidly obese title character (Gabourey Sibide) has been raped by her father and impregnated by the man twice.  The first baby was born with Down’s syndrome, the second is on its way.  When her latest pregnancy is discovered by the school, she gets expelled.  As for Precious’ mother (Mo’nique), in her better moments she tells her daughter that education won’t do her any good, and her best hope is to, “get your fat ass down to the welfare.”  But most of the time she just abuses Precious physically, verbally, and sexually.  For good measure, all the kids at school and in the neighborhood pick on Precious.  It’s no wonder the girl has retreated into a fantasy world.  But wait, there’s a light at the end of the tunnel.  Precious is referred by her principal to an alternative school populated entirely by other cultural stereotypes.  There, thanks to the efforts of her language arts teacher Ms. Rain (Paula Patton), she learns that literacy is all it takes to overcome such crushing adversity.

No doubt there are people in this world who have endured lives as horrific as the one Precious leads in this film.  That said, seeing as this book was written by a teacher not unlike the film’s Ms. Rain, I’m guessing Precious and all her myriad problems were a composite of several real life students as opposed to a fictionalized version of any one of them.  That’s what it feels like, anyway.  I'm also guessing that at least some of them can read, and that hasn't solved all their problems.  Furthermore, the material is handled by director Lee Daniels in such a melodramatic and manipulative way that it veers towards caricature.  The end result is more like some right-wing Senator’s anti-welfare diatribe than the story of perseverance and empowerment it professes to be.

On the plus side, the performances are excellent across the board.  If Sibide fails to make Precious a real human being, blame it on the script, not her.   The film asks a great deal of the first-time actor, and whether portraying the utter despair of her reality or the fantasy of appearing on a music awards show, she gives her all.  Mo’nique also shines in the kind of role few actresses would want to take, almost (almost) humanizing a monster.  There’s also good work from Lenny Kravitz and bad movie punch-line Mariah Carey, proving if nothing else that director Daniels has a knack for getting good performances out of his cast.  I’d be tempted to give Daniels credit for knowing how to push an audience’s emotional buttons, but damn, how can you not feel sorry for Precious?  Daniels’ storytelling abilities, on the other hand, are nothing to write home about.  The movie has a ragged feel that can’t entirely be laid at the feet of its editor.  For all its four-star reviews, Precious just isn’t that good of a movie.  2 out of 4 stars.
Posted by Bob Ignizio at 12:54 AM

Well it's good to see a nice critical review of this movie. I too, have seen nothing but 4 stars...but now I know!

Bob - nice honest review for a dark movie. Never even heard of it before, but maybe I can catch it if my queue gets a little empty.