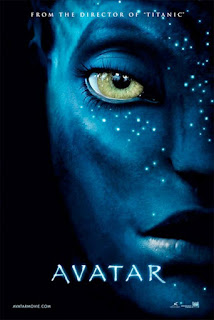 After the death of his twin brother, Paraplegic marine Jake Sully (Sam Worthington) voyages to the alien world of Pandora to complete the mission his late sibling had signed up for. The mission involves transferring Jake’s consciousness into an artificially grown body called an avatar via some futuristic gizmo. These avatars have been created to look like the native humanoid population, known as the Na’vi.

The Na’vi are currently living in a giant tree that just happens to be located over a large deposit something called “unobtanium”. The scientists and other peacenik humans, chief among them Dr. Grace Augustine (Sigourney Weaver), want to find a diplomatic way to get the natives to move so that this unobtanium can be harvested. That’s the reason for the avatars. Corporate big-wig Parker Selfridge (Giovanni Ribisi) realizes it might be bad publicity if they just went in and killed off the Na’vi, but he’s also sensitive to his investor’s bottom line. He tells Augustine if she doesn’t get results soon, he’ll let Colonel Quaritch (Steven Lang) send his private army in to get the job done.

After a bumpy start, Jake (in avatar form) slowly begins to win the trust of the Na’vi. They even agree to let him become one of them, provided he can make it through their rites of passage. Neytiri (Zoe Soldana) is charged with preparing Jake for these challenges, which culminate in learning how to bond with and ride a giant flying lizard thing. Because of Jake’s success, Augustine is given a little more time to try things her way. But Jake finds himself caught in the middle when Quaritch offers him a chance to get his legs back in return for intelligence about the natives.

Call this a spoiler if you want, but it should come as no surprise to anyone that Jake and Neytiri become romantically involved, and that the final fate of Pandora will be decided not diplomatically, but rather by a spectacular, action-packed battle. What is surprising is how much time is spent on story, character, and just showing the simple wonders of this alien world.

Also surprising is the degree to which Cameron includes political allegory in his film. This is an unrepentant left-wing fantasy. The Na’vi are meant to evoke native Americans, and their “in harmony with nature” lifestyle is shown in the most positive light. With only a few exceptions, the humans are the bad guys who have depleted all their own resources, and are now moving on to pillage other planets. There are also overt references to the war on terror, with Quaritch talking about pre-emptive strikes, shock and awe, and fighting terror with terror.

But politics aside, this is just an entertaining and well made movie. The basic plot is nothing new, but Cameron adds enough fresh touches that the end result doesn’t feel too recycled. The effects are amazing, but unlike some effects-heavy blockbusters this movie doesn’t fetishize them. They are tools to tell the story, not an end unto themselves. The same is true of the 3D. It’s excellent, but Cameron doesn’t screw around throwing things out of the screen at you every couple of seconds like those old SCTV “Dr. Tongue” sketches.

My only complaint is that the good guys and bad guys portrayed in such absolute, black and white terms. I realize that’s what most people want in a movie like this, but considering one of the themes Avatar deals with is the demonization of an alien culture so we can justify killing them, it just seems a little hypocritical. Still, I’d be hard pressed to find a fantasy/sci-fi/action film this year that I would recommend more highly. This is definitely one to see in the theater. As for spending the extra couple bucks for the 3D version, I don’t think you’ll miss it if you want to save the money. As good as the 3D is, this is a real movie, not a gimmick. 3 ½ out of 4 stars.
Posted by Bob Ignizio at 3:30 PM

Rock on! I loved this movie. It took the place of my #2 film of the year! I agree...the lack of 3D, in my opinion, will not diminish the quality of the film in anyway, shape or form.

I too really enjoyed this movie despite it being entirely predictable. The one part I was slightly surprised by was the way the main bad guy died, which was in keeping with the super-leftist worldview of the movie (that in no way bothered me). I also thought there was a big environmentalist message here, and not only were the Na'vi comparable to Native Americans, but more generally comparable to countless societies besieged in the name of natural resource extraction - especially in Africa. They even tie it in to Iraq, although the society there was not as idyllic as that in Pandora. Of course, as you noted in your review, NO society is - or ever was - as idyllic as Pandora. I guess adding complication to this film might have risked offering justification for imperial capitalism. The simplified moral universe in this film also allows for something rather interesting: the complete vilification of humans accompanied by total empathy and identification with an alien species. Not a totally novel idea, but a far cry from the classic tale of alien conquerors attacking us.

Figured you'd like this one, Ben. And I agree you on the Na'vi having parallels to all the different cultures you mentioned. I'm fine with most of Cameron's leftist/environmentalist themes and allegories when he handles them with subtlety. It's once he has his military bad guy start talking in ways that explicitly bring up Iraq that I think Cameron screws up. I don't know how literally we're really supposed to take that allegory. I imagine not too far. But it's the kind of thing that gives nitwits like Anne Coulter legitimate ammunition when they want to talk about how liberals hate America and all that nonsense. Cameron may not have intended to paint "the terrorists" as his heroes, but it's not a hard argument to make that this is exactly what he winds up doing. A little more complexity in the way he handled this would have defused those arguments.

You make a good point Bob, but I think he is somewhat saved by the fact that the Na'vi do nothing that can be construed as a terrorist act, unless someone wants to claim resisting a para-military invasion is terrorism. I also think he made sure that this was not the actual military, but an army of mercenaries contracted by a corporate entity. It is a subtle distinction, really, since our actual military has sometimes functioned in this capacity, but it does attempt to keep the criticism more toward private forces than legitimate troops. In the end, I think Cameron could not resist drawing explicit parallels with Iraq and showing how that sort of rhetoric can be (and has been) applied in any moral context. The problem comes mainly when you try to compare Saddam's Iraq with the apparently perfect world of the Na'vi, and hint by extension that Iraqi resistance by any means is uniformly justified. I don't think he intended that, nor is such a reading of the film justified, but it is nevertheless going to keep the Coulter crowd gnashing their teeth. I agree that some more nuance and shades of gray would be great, but then the fantasy genre seems best when it is simpler and bigger than real life (this is more Lord of the Rings than hard sci-fi). For this reason, you are certainly right that he shouldn't have made such overt references to current events if he wanted to remain purely allegorical. Once he makes this superficial linkage without more thoughtful development, his point of view risks becoming almost as facile as the belligerent discourse he detests.

Movie is the epic battle at the end, well let me just say it's as believable as the Ewoks beating the Empire at the end of Return of the Jedi.