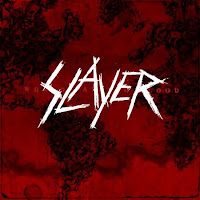 Slayer capped off their first ten years of existence, a period that saw them release one classic album after another, with the aptly titled live album Decade of Aggression.  So how do you follow a decade of aggression?  If you’re Slayer, apparently with nearly two decades of laziness and mediocrity.  Oh, and for good measure, fire your drummer even though he’s the best drummer in metal (that would be the amazing Dave Lombardo for those not in the know).

Sorry folks, but it’s true.  Between 1991 and 2006, a 15 year span, Slayer released a mere 5 studio albums, and one of those was mostly cover tunes.  If it was a case of quality over quantity I wouldn’t mind, but except for a song or two per album, most of Slayer’s output in the nineties and early 21st century has been less than stellar.  Even the return of Lombardo for 2006’s Christ Illusion didn’t help.

Thankfully, Slayer seems to have finally gotten their shit together again on World Painted Blood.  It’s not like they made any drastic changes to the formula.  What we’ve got here are 11 songs about serial killers, war, and how much religion sucks.  The music sounds like classic Slayer, occasionally with a touch of modern influence.  For the most part this band isn’t interested in breaking any new ground, though, and that’s fine.  What matters is that this is the most consistently killer batch of songs Slayer has been able to put together in years.

World Painted Blood starts in strong fashion with its title track, a classic Slayer number with a particularly catchy guitar hook.  Lead single “Psycopathy Red” sounds like it would have been right at home on Reign In Blood, while the follow up single “Hate Worldwide” actually has a guitar hook that reminds me of Slayer’s “classic metal” sounding first album Show No Mercy.  “Playing With Dolls” is a creepy, atmospheric track in the vein of Seasons in the Abyss’ “Dead Skin Mask”, and almost as effective.  “Americon” finds Slayer at their most modern sounding, not to mention surprisingly political, but not to the point that they lose their identity.  “Unit 731” and “Human Strain” are kind of bland and typical, but those are the only songs on this album that feel like filler to me.  I don’t think anyone expects Slayer to be releasing the best album of their careers almost 3 decades in, and they haven’t.  But they have managed to put together a solid, respectable album that compares favorably with their classic material, and that’s all any fan can really ask for.
Posted by Bob Ignizio at 4:18 PM

Hey Bob man, this is The Dude (Movie Reviewer Extraordinaire) remember my movie reviews on myspace?? Anyhows, I found you guys again cause I found Dom Coccaros blog and saw you in there, and I remembered you guys from my myspace days (long gone) so anyhows, I subscribed to your blog.

Nice to see you around man, still reviewing movies and music! Ill comment regularly so keep tapping those computer keys!

Good to hear from you again, "Dude". I tend to veer all over the place on this blog like Dom does on his, but hopefully there will be some stuff you find interesting.

Bob, your review is 100% on the money! I've been waiting years for a new Slayer album to kick this much ass and this delivers on all fronts. A great return to form!