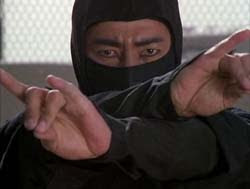 In the eighties, few things were more awesome than ninjas.  In the past, the only people who owned martial arts weaponry were, you know, people who actually practiced martial arts.  In the eighties, however, every redneck who had seen one too many Chuck Norris movies had his own pair of nunchakus.  And I’m not gonna’ lie, I would have loved to own a couple of throwing stars or a ninja sword.  But I was a kid at the time.  I had to make due with toys, like the eighties version of G.I. Joe.  And who was the coolest Joe?  Snake Eyes, a ninja.  A ninja who used an uzi, but a ninja nonetheless.

Why were ninjas so big in the eighties?  The credit belongs largely to one man:  Sho Kosugi.  Sho actually knew ninjitsu, the martial art practiced by ninjas.  Beginning with Enter the Ninja (1981), he starred in a series of popular ninja films that did big business for much of the decade.  Although Enter the Ninja is not devoid of charm, it’s basically a standard-issue eighties action movie. It’s competently made, has a dumb but passable storyline, and boasts some decent action sequences.  Still, this is the movie that made it cool to run around in your pajamas while carrying a sword.

Enter was a hit, and Sho followed it up with Revenge of the Ninja in 1983.  In 1984, the ninja formula was expanded to include elements of horror and Flashdance (which is kind of redundant, I guess) in Ninja III:  The Domination.  Each film was progressively cheaper and sillier, culminating in one of the best bad films ever made:  9 Deaths of the Ninja (1985).   From the opening credits sequence, where three girls in skimpy outfits aerobiscise to a terrible eighties pop song while Kosugi swings his sword around, it’s clear that this is something special.  Kosugi is his usual bad-ass ninja self, but Blackie Dammett (father of Red Hot Chili Pepper Anthony Keidis) steals the movie as the wheelchair-bound German drug dealer “Alby the Cruel”.  Alby’s gang consists of a band of lesbian mercenaries and Arab terrorist Rahji (Sonny Erang), who proves how evil he is by popping some kids’ balloons.

Sho kept appearing in films through the end of the eighties, notably Pray For Death (1985), Rage of Honor (1987), and the Rutger Hauer vehicle Blind Justice (1989), but by the nineties his star had faded.  For whatever reason, ninjas just weren’t cool anymore, at least in .  Sho made a couple more movies in , but for the most part he faded into the darkness as only a ninja can.  Flash forward to November 2009, and we find the Wachowski Brothers and director John McTeague aiming to make ninjas cool again with their new film Ninja Assassin.  I still had my doubts, but then I took a look at the cast.  Sho Kosugi has returned.

The amazing opening credits sequence from 9 Deaths of the Ninja:

Sho Kosugi's in Ninja Assassin? Oh, yeah! Now I'm definitely checking it out! I love Kosugi, as any self-respecting '80s kid would. I guess we'll never know exactly why ninjas were all the rage back then but damn, if it had ninjas in it, I was there! I just hope that Ninja Assassin can get a new wave of ninja flicks going. It won't be the same as back in the day, of course, but ninjas with CG throwing stars is better than no ninjas at all.

I too remember the heyday of the American Ninja. Every budding 10-year-old sociopath on my block had nunchucks and throwing stars. It was a frightening time. You could order all that stuff from Ninja magazine, and unscrupulous parents would. (They also had those machines that would help you do splits by cranking your legs apart, in order that you might become a more durable warrior.) Hell, if you go to flea markets today you'll find a wide assortment of shurikens and ninja accessories, along with Lord of the Rings battle-dwarf swords, are still popular with rednecks today. Back then, we all tried to do twirl the nunchucks ninja-style, but inevitably hit ourselves in the face, which was more unpleasant than when the neighbor kid hit you in the face with them, since you had no one to reap revenge upon but yourself. Speaking of revenge... wasn't Revenge of the Ninja the one with a multi-ethnic street gang featuring, among other characters, a black guy on roller skates? Also, I believe the mob boss tells his Indian henchman to go scalping. Such an odd mix of political correctness and, well... the opposite.

So, Bob, where do I start? I came into my 10 year old boy phase late in life:) Do I watch 9 Deaths or start with something else? Cheese and gore don't bother me but I'd prefer something with smooth moves.

Jeff - Man, I hope they don't use too much CGI or even wire work in 'Ninja Assassin'. Still, like you say, it's better than nothing.

Ben - I actually haven't seen 'Revenge' (gotta' put that on the to-do list), but based on the trailer it doesn't look like the movie you're thinking of. The multi-ethnic street gang (often with bad new wave/punk rock fashions and hair) was a great invention of eighties trash cinema, though.

Juniper - I would stay start with 'Enter the Ninja', then just keep going in chronological order. Each one gets progressively cheesier. The fight scenes in 'Enter' are pretty good. Not so much in 'Ninja III' and '9 Deaths', but they have a certain goofy charm of their own. Just watched '9 Deaths' again this past weekend, and it's still a hoot.

Just saw Ninja Assassin, check out my review for it Bob. But yeah, these old ninja movies are cool. I prefer the real ninja movies though, like Duel to the Death, check that movie out man! Its freaking sweet! Dissapearing ninjas, giant ninjas, ninjas that seperate into 8 different ninjas...things get crazy on that one!

I want to revisit these old American Ninja movies, like Revenge of the Ninja, Enter the Ninja, American Ninja...then we went down a couple of notches to 3 Ninjas, Surf Ninjas and Teenage Mutant Ninja Turtles...