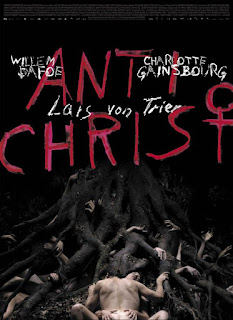 Lars Von Trier’s Antichrist is a beautifully shot, incredibly well acted film that handles its subject about as well as it can be.  That subject is the death of a young child, and how that child’s parents try to cope with the tragedy.  The process is depicted metaphorically, and includes sex scenes that on their own would have earned the film an NC-17 rating.  Eventually things come to a head in a climax of harrowing violence and insanity that the characters must get through in order to get on with their lives.

It’s an extremely powerful film, and despite the tone of the fantastic it employs to tell its story, the raw horror and unpleasantness is undiminished.  Much of the credit or blame goes to writer/director Von Trier, but without such committed actors as he has here in Willem Dafoe and Charlotte Gainsborug, it wouldn’t work nearly as well.  While I would be shocked to see it happen, both of these actors deserve Oscar nominations for the incredibly difficult work they do here.

Suffice it to say, this is not a movie for those seeking a little light entertainment at the cinema, and it’s easy to see why Antichrist has polarized audiences.  This is an uncompromising, unflinching art film that belongs in the halls of movie infamy alongside Passolini’s Salo: 120 Days of , Godard’s Weekend, and Greenaway’s The Baby of Macon.  If I had children of my own, I don’t think I could have handled this movie.  And yet, the film is so well done I can’t help but say that I think it’s one of the year’s best.  Just don’t ask me to watch it again.  4 out of 4 stars.
Posted by Bob Ignizio at 1:27 AM

Thanks for the review, Bob! I haven't had an opportunity to watch this yet and frankly, I'm not sure if I want to. I have a feeling my reaction will either be despair over how harrowing it is or rolling my eyes at how ludicrious it is - or some unsatisfied reaction inbetween. All I know is that Von Trier's Breaking the Waves was one of the most upsetting films I've ever sat through and that sounds like a walk in the park compared to Anti-Christ.

'Breaking the Waves' is like a ray of sunshine next to this one.