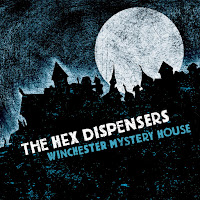 Winchester Myster House, the new album from Austin, TX's Hex Dispensers, is 12 songs of kick ass punk rock minus the mach posturing of hardcore, the whininess of emo, and the syrupy sell-out of MTV mall punk.  This bad boy sets its sharp and shiny barbs into your brain and refuses to let go right from the start with “Doomsday Romantic”.  “O-B-I-T” and “It’s Your Funeral, Minion” bury you six feet under, before “Get Your Doppelganger On” digs you up just to insult your fashion sense.  I’d go through and single out every song on here for praise, but I’m running short on clever metaphors.  As far as what this sounds like, The Hex Dispensers combine the punk rock rawness of The Ramones with the weirdness of Devo, with just a touch of sixties garage rock and eighties alternative by way of The Pixies and Sonic Youth.  Think The Spits if they were better musicians and a little more intellectual in their lyric writing.  The whole thing is capped off by a killer cover of Devo’s “Gates of Steel” that gives the song that forgotten gem the hard rocking edge it always cried out for.  I don’t like much of what passes for punk rock these days, but I really love this album.

Here’s a clip of The Hex Dispensers performing “Doomsday Romantic” and “O-B-I-T” live.  Sound's a bit muddy, but not too bad for what is essentially a bootleg recording:

I love the Hex Dispensers! Glad you are digging on them too... thereby validating my musical taste with your impeccable credentials.

Your blog keeps getting better and better! Your older articles are not as good as newer ones you have a lot more creativity and originality now. Keep it up!
And according to this article, I totally agree with your opinion, but only this time! :)