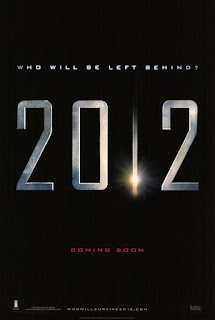 2012 is completely ridiculous trash that turns massive destruction and the deaths of billions of people (including, by implication, just about everyone watching it) into fodder for entertainment.   Of course the disaster movies of the seventies did the same thing on a smaller scale, and who can resist The Towering Inferno or Earthquake?  Like those films, this is a mix of carnage, melodrama and an all-star cast of actors familiar enough to put butts in seats, but not so big that their salaries would cut into the special effects budget.

Heading up the cast is John Cusack as a regular schmoe trying to keep his family, including ex-wife Amanda Peet, alive in the face of Armageddon.  Chiwetel Ejiofor, who was excellent in last year’s Redbelt, a film nobody saw, will probably do a lot more for his career here.  He plays the heroic scientist who has to break the news to President Danny Glover that he’s not going to get a second term.  There are also supporting roles for Thandie Newton as Glover’s daughter and Oliver Platt as the chief of staff, and Woody Harrelson gets a small but memorable role as a conspiracy nut who turns out to be right.

Of course the real stars of 2012 are the special effects team.  If you’ve seen the trailer for this movie, then you know how over the top the action scenes are.  And trust me, the trailer doesn’t show it all.  If the movie were nothing but these action scenes, it would get tiresome pretty quickly.  Thankfully, triple threat writer/director/producer Roland Emerich shows some understanding of pacing, if not subtlety.  He lets the movie slow down for little character moments, which for the most part are just as silly and unbelievable as the action scenes, but appreciated nonetheless.

Of course this is nothing new for Emerich, who so memorably destroyed the White House in Independence Day and gets the chance to try and top himself here.  I haven’t much cared for Emerich’s films in the past, but whether I’ve just been worn down by so many truly awful movies of late, or Emerich has actually gotten better, I have to admit I found myself enjoying 2012.  No, this is not a great movie that will affect you in any meaningful way.  The dialog is hokey.  The direction is hamfisted and manipulative.  I could find a thousand ways to pick this movie apart.  But you know what?  It wouldn’t matter, because it’s still a damn entertaining slice of cheese.  Call it 3 out of 4 stars.

I really dug 2012 on the level of sheer spectacle. I don't know if I'll ever feel motivated to watch it again but as a one-time big screen experience, it was something to see. I haven't seen Emmerich's last few films but this one looked like one I couldn't pass on and that proved to be right. And as you say, there's enough character bits so it doesn't feel like a dehumanized machine of a movie.

I have to admit, I've been anxiously waiting/dreadfully skeptical of this movie since I first heard of it over a year ago. I'm a life long Cusack fan, and the subject matter (conspiracy theory, armageddon, ancient predictions) hits me to the core, but I've been so let down by movies like Shyamalan's Signs, and Conspiracy Theory (maybe Gibson's the link?), that I would hate to see another favorite topic of conversation become more pop fluff fodder. Thanks!

Jeff - glad you liked it, too. Don't feel bad about missing Emerich's last few films, you didn't miss much. Although I kinda' liked '10,000 B.C.' for the cheese that it was, it's by no means a must see.

Kinks - For all that they use the Mayan prophecy in the promotion of this movie, it really doesn't get much play in the actual film. It's mentioned, but it kind of gets put on the back burner.