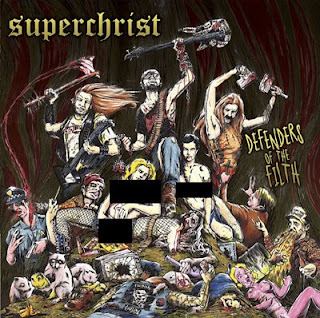 
Defenders of the Filth marks the return of guitarist Hank Bitchlover to the Superchrist fold after a one album hiatus.  Nonetheless, it continues the band’s progress away from pure Motorhead worship towards a sound of their own that began on 2007’s Hank-less Headbanger.  The influence of Lemmy and company is still apparent, not to mention other classic NWOBHM bands like Judas Priest, Iron Maiden, Venom, and Saxon, but you can also bits of punk/garage bands like Turbonegro and The Hellacopters more prominently than in the past.  But it ain’t just about the sound, it’s about the songwriting.  Every song on here has a hook that will dig deep into your brain.  And while speed is king on Defenders, the band isn’t afraid to slow things down, like on the almost-ballad “”.

Vocalist/bassist Christ Black writes some damn fine lyrics, smart and witty but never jokey, all delivered with a voice that sounds like a smoother, more melodic Lemmy.  Hank Bitchlover’s leads are a lesson in tasteful lethality, and drummer Ian “The Pit Viper” Sugierski beats the skins like it’s personal.  You want stand out tracks?  How about all of them?  If I had to play favorites, I guess I’d say “Stay Black”, “Peace of Ass”, “Still Not Drunk Enough”, and “Black Skulls”, but this is a rare modern metal/hard rock album that’s truly all killer, no filler.  Do yourself a favor and pick this one up pronto from the band’s Myspace page:  http://www.myspace.com/godblesssuperchrist.
Posted by Bob Ignizio at 11:57 PM