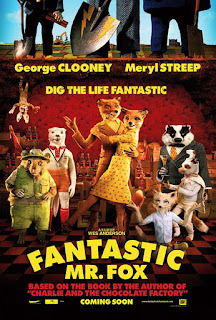 Rather than try for a slavishly faithful adaptation of Roald Dahl’s book The Fantastic Mr. Fox, director Wes Anderson has opted to reshape it to suit his own distinctive style and themes. The basic premise, that Mr. Fox (voiced by George Clooney) steals food and beverages from three mean and nasty farmers, is the same.  However, has added new characters and plot elements to the tale that give the movie a flavor unmistakably his own.  The humor is dry and quirky, and where the book focused mainly on Mr. Fox, the movie puts more emphasis on the titular character’s extended family and friends. The result is far closer to The Royal Tenenbaums than Charlie and the Chocolate Factory.


To realize his vision, has used the stop-motion animation process, in which models are painstaking moved and photographed one frame and one fraction of an inch at a time.  The same process was used in A Nightmare Before Christmas and Coraline, but it’s (intentionally) a little more rough around the edges here, recalling such early examples of the technique as the 1933 King Kong and the old George Pal Puppetoons.  In this age of digital perfection, it’s kind of refreshing to see such an obviously human-made piece of cinematic magic.  Further breathing life into these creations are the voice actors, which in addition to Clooney include Meryl Streep, Eric Chase Anderson, Jason Schwartzman, and Bill Murray.

Although fidelity to the source material was clearly not ’s main concern, there’s still more than a little of Dahl’s black humor and borderline misanthropic worldview coursing through the film’s veins.  It’s not dour or depressing, but there’s definitely more of an edge to Mr. Fox than you’re likely to find in the average kid flick.  Characters get wounded, even die.  Humanity is not portrayed in the most favorable light, and the hero of the film is an unrepentant thief.

Of course the question is, is this really a kid’s movie?  Like this year’s Where the Wild Things Are, this feels more geared towards adults nostalgic for their childhoods than actual kids.  At least it’s more fun than Wild Things, but it still seems a bit subtle for the kiddie crowd.   The only complaint I have is that Mr. Fox trots out the same tired “be true to yourself” message that seems to be in every kid’s movie these days in lieu of anything of actual substance.  Given the nature of the characters and situations here, that message takes on a slightly more subversive slant than it might in something like Kung Fu Panda, but not by much.  Still, this is a visually stunning, smartly written, and highly entertaining film, and there’s nothing wrong with that.

Gonna go see it this week! Cant wait, Royal Tenenbums is one of my top films of all time, so something similar yet different is something I would very much like to see. Thanks for that review Bob!

Just saw the movie myself and loved it. I haven't been impressed with Anderson since Tennebaums but this puts him back on the A-list with me. This movie charmed me from beginning to end - truly great stuff. One of the year's best!