There's Still Some Life In Megadeth 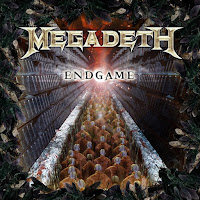 After helping to lay the foundations for thrash metal in the early eighties and eventually crossing over to mainstream success in the early nineties, Megadeth broke up in 2002.  Considering how bad their last few albums had been, it was more like a wounded animal being put out of its misery than an occasion for sadness.  Then in 2004, guitarist/vocalist/sole original member Dave Mustaine put together a new version of Megadeth and started repairing the damage to his band’s reputation.  Comeback album The System Has Failed wasn’t quite there yet, but its 2007 follow-up United Abominations was the best thing the band had done since 1990’s Rust In Peace. Now Mustaine and company are back with another album, and Endgame is every bit as good as its predecessor.


Endgame is a textbook example of how to do technical, complex metal without sacrificing either ferocity or catchiness. Guitar freaks will be in heaven as guitarist/vocalist Dave Mustaine tosses off killer riffs and trades blistering leads with new axeman Chris Broderick. Mustaine’s whiny snarl of a voice is sweetened somewhat, but nowhere near the degree it was on the Megadeth’s crossover albums of the early to mid nineties. This doesn’t sound like a guy trying to sing pretty so he can get on the radio, it sounds like the pissed-off Dave of old, just with a little more experience as a singer under his belt.

On United Abominations, Mustaine’s recent conversion to Christianity and his adoption of certain dubious conspiracy theories associated with the Christian right took center stage in his lyrics. The only overt example of that sort of thing on Endgame is the title track. Mustaine still gets into political issues like torture (“Headcrusher”) and the need for police to have better firepower (“44 Minutes”), but there are also more personal songs like “Bodies” and “The Hardest Part of Letting Go… Sealed With a Kiss” in which he looks back at his string of broken friendships and relationships gone sour. But regardless of what Mustaine is singing about, the songs on Endgame all rock. There’s nothing on here that I would call filler, and if you’re a fan of the classic thrash metal sound you’ll want to pick this up.
Posted by Bob Ignizio at 2:42 PM