'Inglourious Basterds' and the power of propaganda 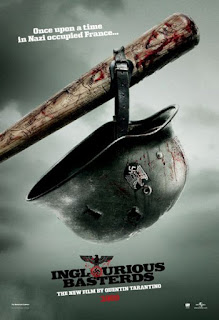 The first thing you see on the screen in Quentin Tarantino’s Inglourious Basterds is a title card that says, “Once upon a time in Nazi-occupied France”. In film geek shorthand that’s a nod to Sergio Leone’s masterpiece of the spaghetti western genre Once Upon a Time in the West, and Tarantino has said in interviews that this is a spaghetti western that just happens to take place during World War II. But more importantly, as with Leone’s film Tarantino uses “Once Upon a Time” to let the audience know up front that what they are about to watch is a fairy tale, and any expectations of realism or historical accuracy should be left at the door. Because believe me, realism and historical accuracy are the least of this movie’s concerns.

The story proper begins with Nazi Colonel Hans Landa (Christoph Waltz) intimidating and manipulating a French farmer via trademark Tarantino dialog into revealing where he has hidden a Jewish family. Landa then has his soldiers kill the family, but the girl Shosanna (Melanie Laurent) manages (and to at least some degree is allowed by Landa) to escape. Meanwhile, a special unit of Jewish-American soldiers has been assembled by Lieutenant Aldo Raine (Brad Pitt). Their mission is to go undercover in France and kill as many Nazis as possible, in the most horrific ways they can think of. In addition, every member of the Basterds is expected to scalp their victims.

Returning to Shosanna, we find her now living undercover in Paris as a theater owner. She winds up hosting the premiere of a new Nazi propaganda film after a chance meeting with its star, Nazi war hero Frederick Zoller (Daniel Bruhl). When Shosanna discovers that all the highest ranking members of the Third Reich will be attending the premiere, she comes up with a plan to take them all out. The Basterds learn of the premiere as well, and not knowing of Shosanna’s plan set one of their own in motion.

Okay, for those of you who just want to know if the movie is fun, and don’t really care to dig too deep: yes, the movie is a lot of fun. It’s everything you expect from Tarantino – the great dialog, memorable characters, references to obscure pop culture trivia (my favorite this time being one character using the alias “Antonio Margheriti ” – look it up), near perfect use of music, and of course the crazy, over the top violence and action. But like Kill Bill Volume 2, this is a more mature Tarantino. Basterds feels more personal, and although he still borrows from other movies, it’s done in a less obtrusive way.

Despite what you may have been led to believe by the trailers, Brad Pitt is not the star here. He’s a blast hamming it up, but his Lieutenant Rayne is more of a large supporting role. The real star of the film is Melanie Laurent, and her strong, believable performance anchors the film and gives it a much needed sense of weight to balance the exploitation movie antics of Pitt and his crew. Christoph Waltz has gotten the lion’s share of acting praise for his portrayal of Landa, and it’s certainly deserved. However, I was also impressed with Bruhl, who has the difficult task of playing a character you dislike yet still need to feel some sympathy for.

Okay, now to go looking for deeper meaning in a movie that most people probably just want to sit back and enjoy with a bag of popcorn and a coke. Most critics have seized on a quote from Tarantino that the film is about “the power of cinema bringing down the Third Reich”. That’s true up to a point, but I see Basterds as being just as much, if not more, about the power of film to do evil, specifically in the form of propaganda.

There are overt references in Basterds to Leni Riefenstahl, the female director who made the infamous German propaganda films Triumph of the Will and Olympia. And then there is Stolz der Nation, the faux German propaganda film-within-a-film we see in Basterds. Stolz heroically depicts how Zoller single-handedly kills hundreds of American soldiers. In one of the few moments in Basterds to humanize a German character, we see that Zoller is clearly uncomfortable with this cinematic depiction of his deeds, even as the audience cheers. Later there is a scene involving Zoller and Shosanna where the film exerts its power over Shosanna at a critical moment. She knows the film is a lie, and knows Zoller for what he is, but for just a split second it affects her and she pays a price for it.

Stolz is the kind of thing we are used to seeing as propaganda, but is it really so different from watching the Basterds beat, scalp, and gun down dehumanized Germans while making wise cracks? What are The Basterds if not a kind of propaganda? They are essentially cartoon characters, calling to mind the covers of WWII era comic books (almost without exception drawn by Jewish artists) where Captain America or the like would deliver a roundhouse punch to Hitler, or some bespectacled caricature of a Japanese soldier. Of course when the propaganda is on our side, we tend to look at it as just harmless entertainment. Propaganda is something those other bad countries make, not us. But regardless of how deeply you choose to look into this film, it’s one of the most daring and original, not to mention fun, movies of the year. 4 out of 4.

Lest anyone say they weren’t warned, large portions of this film are in various foreign languages with subtitles. If you’re illiterate I can understand this being a problem, but since you’re reading this review I can only assume that’s not the case. Suck it up and read a little. Also, there are some extremely gory and violent scenes in this movie. If you’ve ever watched a Quentin Tarantino movie before, this should come as no surprise. If anything, this is kind of tame after the non-stop blood orgy of Kill Bill. Still, I feel it bears mentioning for those who might be unfamiliar with Mr. Tarantino’s body of work.

I think you really nailed it with the propaganda theme. I was fascinated with Leni R. in college, having studied her in women's studies AND film history. She was always, first and foremost, a filmmaker and cinematographer, but will always be remembered for the Nazi propaganda. Her art was thus depreciated. Tarantino seemed to be paying tribute to her while at the same time underscoring the danger of art manipulating life.

Great review, and I can't wait to see this again. Tarantino gets better and better with every film he makes.

I want not approve on it. I think precise post. Specially the title-deed attracted me to study the unscathed story.