Brains and Prawn: A Review of 'District 9' 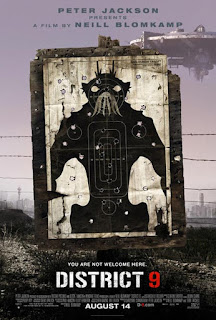 District 9 takes place in an alternate history where an alien spaceship arrived over South Africa in the early eighties. Unable to leave, and with their leaders seemingly gone, the aliens (called “prawns” by some due to their resemblance to large bipedal crustaceans) are quarantined in a shanty town known as District 9. It’s now 28 years since the aliens first arrived, and squalor and crime have firmly taken hold.

The film follows Wikus (Sharlto Copley), a worker at the company in charge of dealing with the aliens. While going door to door to tell the prawns they are being moved to a new camp farther away from humans, Wikus finds a strange alien-made cylinder. A strange liquid inside the cylinder gets on Wikus, causing him to mutate into an alien/human hybrid.

One side effect of his mutation is that Wikus can now use the alien weapons that have been useless to humans until now. This makes him valuable both to the company he works for and the Nigerians who run the criminal underworld in the camp. Also interested in finding Wikus so he can get the cylinder back is Christopher, a prawn with a young son who needs the device so he can return to the mother ship and, from there, home. Whether he wants to do so simply to help his people or to return to earth with more ships to lead an attack is unknown.

District 9 is mainly escapist fantasy, but like the best science fiction it has something to say about the real world in which we live. The resemblance of the alien slum to apartheid era homelands is no coincidence, but one could just as easily find similarities to concentration camps or Palestine. And the private contractors hired to manage the aliens can't help but evoke Iraq and the Blackwater incident.

The prawns are an extreme example of an alien “other”, but by using them the movie shows just how easy it is to marginalize and vilify those who are different, even by those who have endured the same experience themselves (we see both white and black South Africans expressing disgust and hatred for the prawns). We also see the dehumanizing effect this has on those being oppressed, and the full range of negative effects that result.

This is the first feature film for director Neil Blomkamp, and his inexperience does show a little. This is most glaring in the awkward attempt to blend documentary style footage with a more traditional dramatic narrative. The whole point of using a faux documentary approach is to create more of a sense of realism, but the way the film keeps switching styles only serves to make the viewer more aware that they are watching a movie. It didn’t ruin the movie for me, but there’s no denying that the stylistic shifts are distracting, and that takes away from the film enough that it bears mentioning.

Still, while I would have preferred a more uniform approach, the story District 9 tells is compelling and the world it creates is unique and fully realized. Hell, it’s just nice to see a movie that doesn’t think that being entertaining and having some substance are mutually exclusive for a change. Check this one out. 3 ½ out of 4 stars.