Stephen Seagal is 'Driven to Kill' 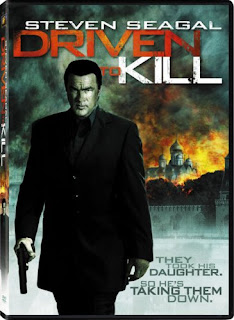 Aging action star Stephen Seagal plays aging ex-Russian mobster turned crime novelist Ruslan who returns to his old New York City stomping grounds for his prosecuting attorney daughter Lanie’s (Laura Mennell) wedding. Seagal is less than thrilled that Sergei (Dan Payne), the man his daughter is marrying, just happens to be the son of Russian mobster Mikhail (Igor Jijikine), who unlike Ruslan is still involved in crime. But Sergei claims he wants no part of his father’s lifestyle, so Seagal cuts him some slack. On the wedding day a bunch of thugs show up, killing Lanie’s mother and seriously wounding the bride to be. Seagal reluctantly teams up with Sergei to track down the people responsible, and action movie cheese ensues.

Driven to Kill is basically a bargain basement cross between Eastern Promises and Taken. Seagal gets to play around with an on-again/off-again Russian accent, bullets fly, asses get kicked, and silliness abounds. But I’m not going to lie to you and try to be “Mr. Cool” and make fun of the movie too much. If you’re in the mood for a straight forward, old-school “B” action flick, you’ll probably have fun with this. Seagal is getting a bit old for this kind of thing, but at least in this case that sort of works for his character. I’d rather have seen a full length version of Cockpuncher, the parody Seagal starred in as part of The Onion Movie, but this is still fun trash. 2 ½ out of 4.

Anonymous said...
This comment has been removed by a blog administrator.
9:31 AM