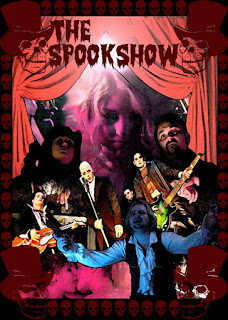 About two years ago my friend Joe Ostrica asked me to write a screenplay for him. I spent a couple months writing the initial draft, and amazingly Joe shot about 90% of the film over a two day period in May of 2008. Over the next year various tweaks were made to the editing, a few additional scenes were shot, and in July of 2009 the finished product was released on DVD. Obviously it would be ridiculous for me to try and review a movie I was personally involved in, but I thought I’d write about some of my experiences as well as what I learned from my involvement in the film. I’m mainly doing this for myself, but hopefully some of you will find this interesting. If you’d rather not know how the sausages are made, feel free to skip this blog.

The whole shebang started in July of 2007 when Joe and his crew shot footage of several local bands playing at Cleveland concert venue Peabody’s. Joe’s original plan was to integrate these scenes into a proposed sequel to his ‘Horror Convention Massacre’ films, but ultimately he decided to do something different. Joe knew I had wanted to write a screenplay, and he knew I would work cheap (i.e. free), so he asked me to see what I could come up with. The requirements were simple: I had to find a way to use the footage he already had, and since Peabody’s was willing to give him access to their entire building for a couple days, most of the action had to take place there. Joe also wanted the movie to take place on Halloween.

The first thing I had to come up with was a basic premise, and for this I was inspired by the 80’s horror film ‘Hello Mary Lou: Prom Night II’. Both that film and the script I ended up writing deal with the spirit of a murdered girl possessing someone and using them to exact violent revenge on those responsible for her death. The idea was hardly fresh when ‘Mary Lou’ used it, but in the interest of complete honesty about the sausage making process, that’s where I stole it from. Beyond that, however, I tried as much as possible to avoid any intentional cinematic larceny.

Instead, I tried to draw on things from my own background. I’ve played in bar bands for more than 20 years, so I was very familiar with the world this movie would be taking place in. I initially had a lot more scenes dealing with the behind the scenes world of local bands, but for various reasons (mostly pacing) I cut a lot of that out before turning in my final draft.

I also have some experience with the “ghost hunting” scene via www.deadohio.com, a website my wife runs. I figured it would add some flavor to have the main character, Diane, be an amateur paranormal investigator. The local rock club would have a reputation for being haunted, thus giving the character a reason to go off snooping around so she could get possessed. In the final cut there probably isn’t a huge amount of this stuff in the script, either, but I think there’s enough that it adds another interesting layer.

Another thing I drew on for inspiration was Cleveland rocker Michael Stanley. Marshall Stanton, the character who accidentally kills the girl whose spirit possesses Diane, was based loosely on Stanley. Like Stanley, Stanton was supposed to have been popular in Cleveland, but despite having a few minor national hits never really broke big outside of his home town. The character eventually took on a life of its own as I wrote the screenplay, and in the end I don’t think there’s much resemblance, but it was helpful to have that real life person as a starting point. And just to be clear, I’m pretty sure Michael Stanley never killed anyone.

Over the course of making three films, Joe had assembled a reliable group of local actors, so it made sense to try and write a few roles specifically for some of them. Dave, Cyndi’s cheating boyfriend, was written with Bryan Jalovec in mind. Bryan was the star of all Joe’s previous films, and I knew he would be able to handle this substantial supporting role. I also wrote parts for local noise musician Steve Eggs and Cult of the Psychic Fetus drummer Alex Murder. For most of the roles, though, I just wrote what were hopefully interesting and believable characters. For the most part I would just have to trust in Joe’s ability to somehow find competent actors he could coerce into being abused on camera for little or no money.

With those elements as a starting point, I set out to write my screenplay. I wanted to keep the main story fairly serious, but I also knew that to satisfy the target audience I needed to include a certain amount of violence, gore, nudity and low-brow humor. By no means was I trying to write ‘Citizen Kane’ here, but I did my best to make sure that between the decapitations and gratuitous boob shots there were characters you could care about and a story that would hold an audience’s attention.

The biggest thing I took away from this stage of the filmmaking process is that when working on a low budget film, you write for the resources you have, not the resources you wish you had. If you’ve got a huge budget and a generous amount of time to shoot, then your only limit is imagination. Joe had a ridiculously small budget and only a few days of actual shooting to make his movie, so there was no point in writing a spectacular car chase that ends in a fiery explosion, for example. The other thing I learned is: don’t get too attached to anything you write. Film is a collaborative process, and it’s about everyone working together to make the best movie possible under the circumstances. Things are going to change once the cameras roll. But I’ll get into that more in my next blog.

Note: I don't think Joe has 'The Spookshow' for sale online just yet, but you can contact him at http://www.myspace.com/thcm3 and ask him how to get a copy.