A Sabbath By Any Other Name… 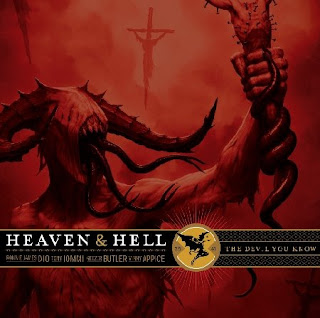 Would still be as Black. Technically 'The Devil You Know' is the “debut” release from Heaven and Hell, but real fans know this is actually the 4th studio album from the Ronnie James Dio fronted incarnation of metal godfathers Black Sabbath. Picking up right where they left off on 1992's 'Dehumanizer', these rock veterans deliver one crushingly heavy slab of doom after another. To be sure there are a few so-so tracks like “Rock and Roll Angel”, but for the most part Tony Iommi’s riffs are as memorable as ever, Geezer Butler and Vinnie Appice provide a rock solid rhythm section, and Dio’s voice still sounds amazing.


Highlights include lead off single “The Bible Black”, the “war on terror” inspired “Double the Pain”, the cheesily titled but no less rocking “Eating the Cannibals”, and epic closer “Breaking Into Heaven”. Dio’s lyrics are metaphorical as always, but a little more down to earth and easier to decipher than in the past. A quietly atmospheric number in the vein of “Too Late” or “Sign of the Southern Cross” would have been nice, and I’m not super keen on the order of the songs (“Atom & Evil” is okay, but it’s no way to start an album), but overall 'The Devil You Know' is a surprisingly strong release from a band most critics wrote off a long time ago, proving that not all rock reunions have to suck. I’ve been listening to it constantly since I bought it a few weeks ago, and I like it more each time.