Warrior of the Analog Wasteland: Bob Reviews ‘Exterminators of the Year 3000’ 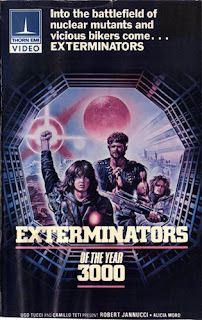 I recently came into the possession of a sizeable stash of VHS tapes. These weren’t just any old VHS tapes, though. No siree. These were formerly the stock of Lakewood, Ohio’s lost and lamented B-Ware Video. And while it sometimes seems like every last cheesy horror and sci-fi film has been released on DVD, this stash contained a number of films that have yet to surface in the digital format. So I spent a few weeks transferring many of these forgotten classics onto DVD-R, and in the coming weeks and months I plan to watch and review some of them here on Utter Trash. Seeing as Neil Marshall’s Doomsday just hit home video this past week, I’ll start with an earlier Mad Max rip-off: 1985’s Exterminators of the Year 3000.
Giuliano Carnimeo’s Exterminators of the Year 3000 is a fairly typical example of eighties Italian Mad Max rip-offs. It’s a film clearly “influenced” by The Road Warrior with water substituted for gas as the scarce commodity. And yet for all it’s brazen borrowing, it still throws in some loopy curve balls like Tommy (Luca Venantini), a kid with a bionic arm. Tommy knows where there’s a big stash of water and just wants someone to help him get it back to the band of survivors he’s been living with. Unfortunately his best hope for assistance seems to be Alien (Robern Jannucci).

Usually in a movie like this the rough edged anti-hero eventually shows he has some kind of moral character, or at least cares about someone other than himself. Not Alien. Very few films have the courage to make their protagonist such an unlikable and unrepentant dick all the way through to the end, but Exterminators never falters. Alien starts out as the biggest douchebag in the wasteland, and by the time the movie is over he still holds the title. Even Crazy Bull (Fernando Bilbao), the leader of the obligatory punk rock motorcycle gang of violent barbarians, seems like he’d be more trustworthy and reliable.

Fortunately for Tommy, he and Alien join up with Trash (Alicia Moro) and Papillon (Luciana Pigozzi). Trash is your typical bad-ass babe with a heart of gold who once had a thing with Alien, and Papillon is the last man alive who actually saw real rain. The fate of humanity now rests in the less than capable hands of this quartet. It’s bad enough that Alien wants to screw everyone over and sell the water to the highest bidder, but before that can even be addressed there’s the previously mentioned biker gang and a rather disappointing group of mutants guarding the water supply to contend with.

This is shoddy filmmaking even by the low standards of eighties Euro trash. There are no real special effects to speak of, but there are some decent stunts and car crashes. The performances are mostly bland, but I have to give kudos to Bilbao (and/or the guy who provided his English dubbing) as Crazy Bull for uttering great lines like, “Onward my merry mother-grabbers!” and the occasional bit of Shakespeare. It’s no 1990: The Bronx Warriors, but Exterminators has enough low-brow appeal to be tolerable if you’re a fan of grade ‘Z’ trash like I am. 6 out of 10.
Posted by Bob Ignizio at 5:26 PM

I'm sure I must've seen Exterminators of the Year 3000 somewhere along the way but all those early '80s post-apocalyptic films have blurred together in my mind by now. Anyhow, thanks for the great write-up - and congrats on landing that treasure trove of VHS material!