Digging up 'The Dungeonmaster' 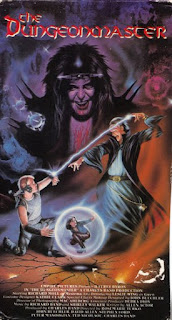 The Dungeonmaster is like a low budget cinematic jam session with Empire Pictures chief Charles Band assigning himself and 6 other filmmakers to each contribute a segment to the movie. The resulting film is held together by a framing story involving Richard Moll (Bull from TV’s Night Court) as evil wizard Mesterma challenging computer nerd Paul (Jeffrey Byron) to various challenges, each taking place in a different setting. But it’s not just Paul’s life on the line. Mesterma has Paul’s girlfriend Gwen (Leslie Wing) chained up, as well. Luckily Paul’s talking home computer Cal has somehow been transformed into a wrist band that shoots lasers, so that helps. Each director gets about ten minutes to do anything they want within this framework, provided they can pull it off on a budget that would make Roger Corman cry uncle.

Imagine taking Tron, War Games, Conan the Barbarian, The Road Warrior, The 7th Voyage of Sinbad, and some generic eighties slasher movie and mixing them together in a blender. That's basically what’s in store for you with The Dungeonmaster. This movie has everything: stop motion killer statues, demonic puppets, homicidal midgets, aerobicising ladies in leg warmers, post apocalyptic car chases, a serial killer, and a performance by shock rockers W.A.S.P. And yet in a film full of weirdness, perhaps the oddest thing is the presence of Albert Einstein in hell alongside Jack the Ripper and other notable baddies. Your guess is as good as mine.

Despite trying to cram so many different elements into one movie and seven different writers and directors, The Dungeonmaster ain’t half bad. In fact I’d say it’s one of the more enjoyable low budget flicks of the eighties. Now I don’t want to oversell The Dungeonmaster. It has plenty of shortcomings due to its budget, not to mention a general aura of eighties cheesiness that has nothing to do with money. But the performances are decent, there’s some good dialog (including the line, “I reject your reality and substitute my own” made famous by the TV show Mythbusters), the effects are cheap but fun, and there’s just enough sex and violence to earn a PG-13. Sadly The Dungeonmaster isn’t available on DVD at present, but if you can find a copy on VHS it’s worth a watch for eighties nostalgia buffs and forgiving fantasy fans. 7 ½ out of 10.