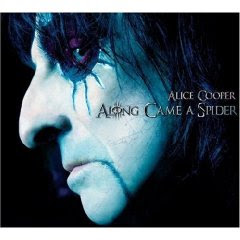 In the early seventies Alice Cooper was the name of a band and not just its lead singer. They released a steady stream of hit singles and classic albums, and Alice the singer was certainly a big part of that success. Since going solo, however, Alice's career has been spotty at best. Although a gifted lyricist and front man, he's more performer/personality than musician. This leaves Alice at the mercy of the musicians and producers he’s working with at any given time, a state of affairs that has far too often led to sad attempts to make him sound contemporary.

So what’s the verdict on ‘Along Came a Spider’? Well, “I Know Where You Live”, “Feminine Side”, “I’m Hungry”, “Killed by Love” and “Salvation” are strong tracks that call to mind Alice’s classic seventies sound. Lead off single “Vengeance is Mine”, however, goes for a more modern vibe and features Slash on guitar. Album closer “I Am the Spider” sounds damn near industrial, and doesn’t really feel like it belongs on here, but it’s not a bad song. The rest of the album consists mainly of so-so filler, with only “Wake the Dead” crossing the line to full on crappiness.

Overall, ‘Along Came a Spider’ boasts a pretty strong batch of material, and Alice is backed up by a solid group of musicians. Unfortunately, the (over)production by Greg Hampton & Danny Saber and an overly compressed mix damn near ruins it for me. So I’m left sitting on the fence with this one. I want to recommend it for the songs, easily some of the best Alice has had in years, but the artificial sounding production is so grating to me that I almost can’t get past it. It’s a real shame because this is so close to being the “comeback” album fans of the seventies era Alice have been waiting for.

Here's the video for "Vengeance is Mine".